This article has been written using Unity 5.2.3 as a reference, many things could have been changed in the current version.

When it’s time to publish a standalone game made in Unity 3D, one of the things to do is ensuring that the game and its UI work fine on different display resolutions. Shipping your game with the Unity resolution dialog window turned on (Edit menu > Project settings > Player | Resolution and  Presentation : Display Resolution Dialog) is an easy way to let your users choose a windowed or fullscreen resolution for the game. But if you want to let them change the resolution from an in-game menu or if you have to enforce a specific aspect ratio, than you need to understand how Unity screen resolution management works, its connection to the PlayerPrefs and how to tune cameras to target a specific aspect ratio. I’ve come up with a basic screen resolution manager for Unity, tested on OS X and Windows. Here is the project on github: UnityScreenResolutionManager[a]. In this article I will explain in detail how it works. 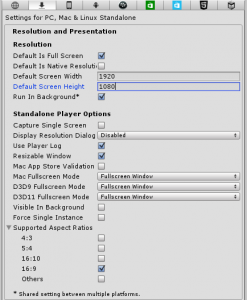 As seen above, when you set a fullscreen resolution with an aspect ratio different from the current display aspect, Unity can insert black bands around the screen to keep the pixel aspect ratio. Unfortunately you cannot count on this behaviour for two reasons: it only works on Windows (OS X stretches the screen), and the black bands on Windows are not refreshing (Steam popups will leave a trail over these bands). The correct way to deal with aspect ratios and insert black letterbox/pillarbox bands is working with camera settings. There is a nice script on the Internet – AspectUtility.cs[b] – which is very simple to use: just add it to every camera in your scene. If you are using Unity legacy UI or NGUI, make sure to use screen space camera render mode and add the AspectUtility.cs to the UI camera. This script will set the camera rect to create some pillarbox/letterbox bands according to the proportion between the current and desired aspect ratio. It will also add a background camera to fill these black bands and guarantee screen refreshing for these areas. It also provides some utility methods to remap screen sizes and mouse positions, useful when you are working with the game UI. Using this script, the way you enforce screen aspect ratio in your game is:

I did some changes to the original AspectUtility.cs script in order to intercept screen resolution changes and update the camera rect accordingly.

To compute the available resolutions, the manager needs to know the current display resolution. On Mac OS X it’s easy, just read the Screen.currentResolution property. When running in fullscreen mode on Windows, as seen above, this property gives you the current game viewport resolution, which can be different from that of the display. The solution I used to get the current display resolution when you start fullscreen is switching to windowed mode at startup, read the Screen.currentResolution property and then switch back to fullscreen. Here is the code:

The above code which is executed inside a coroutine, as you can guess if you notice the yield keywords. This because I need to wait one or two frames when changing resolution (the resolution is actually changed in the next frame after calling Screen.setResolution). After obtaining the current display resolution, it is possible to compute a set of resolutions, based on a list of predefined hardcoded widths.

I’m creating two lists, both for windowed and fullscreen resolutions. Here are the steps:

On Mac OS X (at least on Yosemite where I did the tests) there is a problem when you try to switch from fullscreen mode to windowed mode with a specific window size. The application, in fact, will pass from fullscreen to windowed with an animated transition of a couple of seconds. After this transition you have to call SetResolution again to ensure that the window is resized correctly. I wrote a piece of code for OS X which waits for this transition to end, here it is:

Here is a screenshot of the UnityScreenResolutionManager: 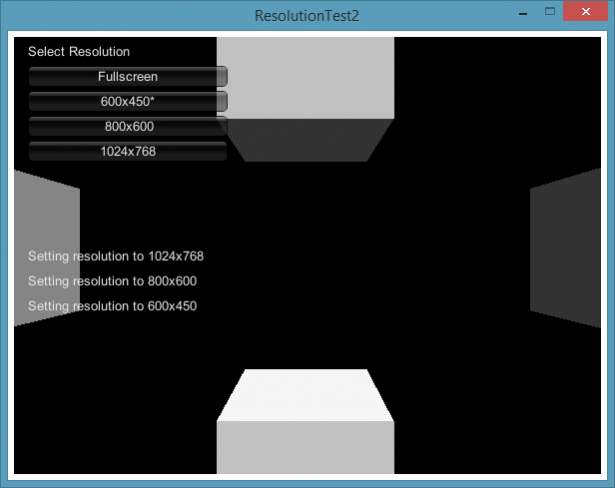 A simple test scene and UI for the screen resolution manager.

The screen resolution manager has some problems on Linux, at least on an Ubuntu 14.10 where I did the tests. The aspect ratio enforcer works fine but the screen resolution module has some issues. As seen above, on a multi monitor setup it will get a wrong current display resolution and it will set a very large resolution corresponding to the area covered by all the screens. On a single monitor setup it works fine; the only issue is when you switch for the first time from fullscreen to windowed mode. You will get a maximized window which cannot be resized by script until you manually unmaximize it. Given these issues and the fact that on Linux it is impossible to test the infinite number of different configurations, I prefer to show the Unity screen resolution dialog  at startup on my Linux builds. 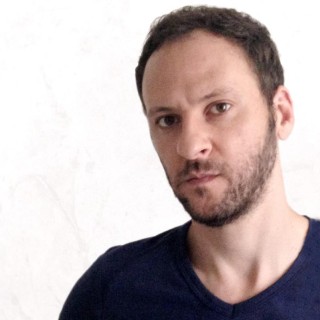